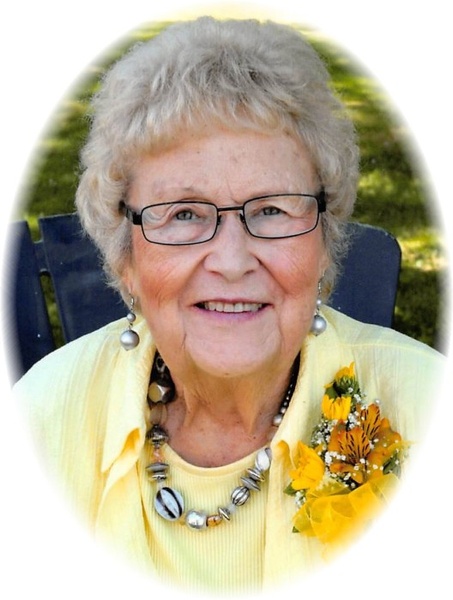 Audine Lubker Wollbrink Jung was born December 30, 1933 during a very cold blustery snow at home,  southeast of Lima, IL  weighing only 2 ½ lbs..  She was born to Sidney and Alta Eshom Lubker.  She attended a one room school (Victory Dist. 48) for 7 yrs.  going to Lima her 8th grade and graduated from Lima.  She attended her freshman yr. at Hamilton High School and graduated in 1951 from Unity High School Mendon, Illinois.    Audine was the 1st Homecoming Queen of Unity.  She was also Adams County Rural Youth Queen in 1954.  She started working after high school at the State Bank of Lima.

Audine married Dale M. Wollbrink  January 8th in 1955 at the Federated Church in Lima. They lived in Lima and to this union was born Tyrella, Trudy, and Travis Wollbrink.  Trudy passed away at 7 days old. Dale passed November 9, 1960 in a tragic tractor accident on their farm southeast of Lima.

June 27, 1962 Audine married Gerhard Jung at the Mendon Lutheran Church and they moved to Sharpsburg, IL south of Springfield, IL.  Gerhard started teaching at Edinburg High School.  They had two children Tyler and Trenda.  Later they moved to Bowen.  Gerhard and Audine celebrated their 50th Wedding Anniversary at the Living Faith United Methodist Church in Bowen.  They were looking forward to their 55th wedding anniversary in late June of this year.

Audine was Lima township assessor, wool buyer, and worked at Thorton Orchard picking 100 bushel of apples per day.  After moving to Bowen she became a very community minded person.  She was instrumental in getting Sr. citizen housing in Hancock County.  Seeing units being built in Bowen, Augusta, Plymouth, LaHarpe, Nauvoo and Hamilton.  She has served on the Hancock County Housing Authority Board since 1981.  She was a member of MYN Club, Home Extension, member of the Living Faith United Methodist Church of Bowen, Augusta Women’s Club, Augusta Lions Club and a member of Adams County Farm Bureau.  She was known for sending cards for every occasion to family friends and community in general.

To order memorial trees or send flowers to the family in memory of Audine Jung, please visit our flower store.