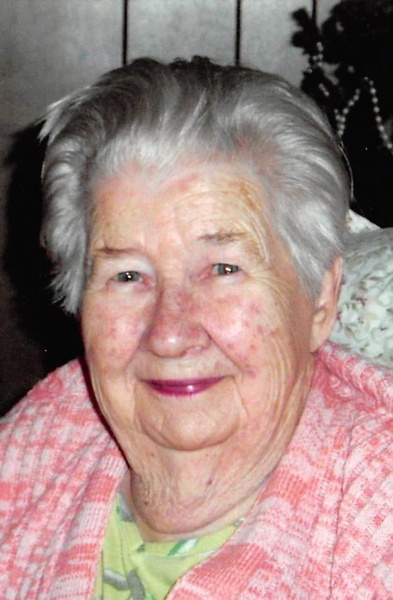 She was a daughter of Walter Krutmeier and Matilda Kroencke of Ursa. She had one brother, Elmer “Bud” Krutmeier, who preceded her in death and a sister Esther Hardy Ensminger, who survives.

Betty truly found her Mr. Wright. Sidney “Bud” Wright aand Betty were married in Monmouth, Illinois on December 16, 1950 by Reverend Harry Cochran. The wedding was attended by dear friends Mariam and Ralph Miller. To this Union was born a daughter, Barb DeWeese.

Also surviving are; three grandchildren she absolutely cherished, Lisa (Dave) Maas, Amy Sheely and Shane Deweese. Then five grandchildren to delight her heart, Emilie Maas, Isaiah Sheely, Daelin, Kenzie and Adalyn DeWeese.  A step granddaughter, Aneta (Dean) Peters and their children, Darin and Chrichette and many nieces and nephews so loved by her.

Betty could light up a room, her positive attitude, fun, joke telling, quick witt has entertained family and friends alike. She is in our hearts and souls forever.

She was preceded in death by her parents, Husband Sidney, on April 3, 1964, and infant daughter, Beverly and her Brother, Elmer “Bud” Krutmeier.

Private family services will be held at a later date. Memorials have been suggested to the family. The Hunter Funeral Home in Mendon has been entrusted with the arrangements.

To order memorial trees or send flowers to the family in memory of Betty Wright, please visit our flower store.