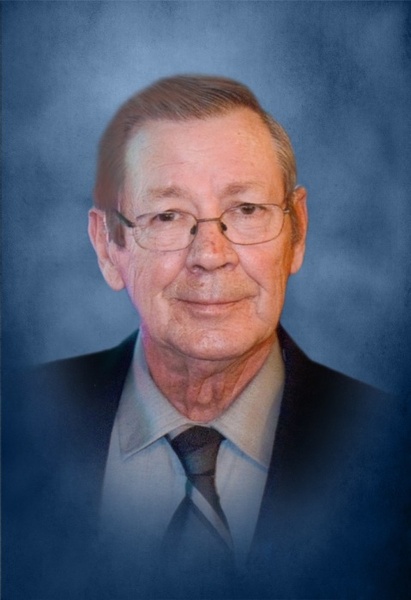 He was born on March 17, 1935, in Mounds, Illinois, the son of Earnest and Lola (Parmley) Thornton.  He first married Elaine Harris in 1956, in Ithaca, New York.  He later married Patricia Prather on January 24, 1976, at the Ebenezer United Methodist Church near Rushville and she survives.

Billy served in the United States Air Force, during the Korean Conflict, as a dog handler.  He was severely injured in French Morocco. He first managed the produce section of the Piggly Wiggly in Sarasota, Florida.  He then worked as a journeyman meat cutter at Piggly Wiggly stores in Collinsville and St. Louis, for 17 years.  In 1974, he moved his family to Rushville, where he managed Feigl’s and Jack and Jill Grocery Stores. He served as a mentor to many young workers at the store.  For a time, he and his wife owned the Jack and Jill Store in Ottawa.  He then returned to Rushville and worked as a supervisor at Excel in Beardstown retiring in 1997.

He was a member of the First Christian Church (Disciples of Christ) in Rushville.  He was active with the Boy Scouts for many years.  He enjoyed coin collecting, gardening, nature, and gambling, including horse racing and video machines.  He was an avid Cardinals fan and loved his grandchildren, attending all of their events.

Services will be at 10:00 AM, Saturday, May 5, 2018, at the First Christian Church (Disciples of Christ) in Rushville, with Reverend Karen Merrick officiating.  Interment will follow in the Rushville City Cemetery, with military rites by the United States Air Force Honor Detail and the Schuyler American Legion Post #4.  Visitation will be from 5:00 PM to 7:00 PM, Friday, May 4, 2018, at Wood Funeral Home in Rushville.  Memorials are suggested to First Christian Church (Disciples of Christ).

To order memorial trees or send flowers to the family in memory of Billy Thornton, please visit our flower store.