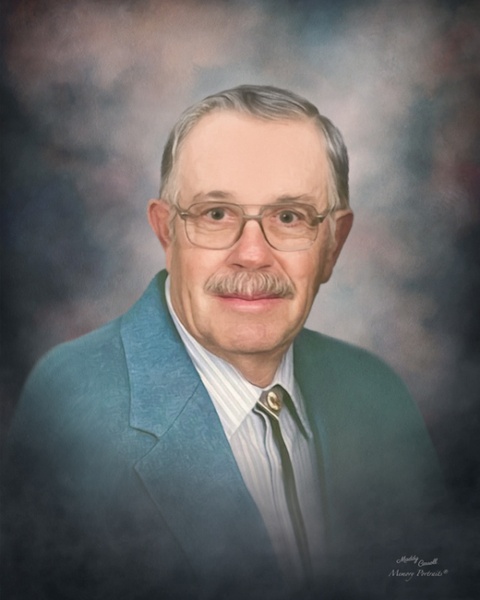 Darrell Dean Mixer, 84, of Mendon, Illinois passed away peacefully at 7:28 pm on Monday, March 14, 2022 at his home surrounded by his family.
He was born on October 29, 1937 in Clayton, Illinois, son of the late Alva and Opal (Wisely) Mixer. Darrell married Myrna Frazier on December 20, 1958 at the Ursa Christian Church and she survives.
Darrell was a lifelong farmer, raising cattle, hogs and grain. He was a member and past President of Mendon Lions Club, a member of Adams County Farm Bureau, Adams County Pork Producers, Adams County Beef Producers, and was a past Director for Adams F.S. for 24 years, serving as President from 1982 until 1991.  He also served as a Director for Growmark, Inc.  After Darrell retired from farming in 2004, he took up woodworking.   He enjoyed making many pieces of furniture for his family and was especially proud of the nativity set that he crafted for the Ursa Christian Church. Darrell could often be found cooking pork chops at the Adams Telephone Annual Meeting. In years past, he served as an election judge.  He served in several capacities for the Ursa Christian Church over the years as a Deacon, Elder, and Treasurer and was a part of several committees.
In addition to his wife Myrna of 63 years, Darrell is survived by three daughters; Sherry Romack of Norman, Oklahoma, Kolleen (Curt) Nisbet of Mendon, and Amy (Kelly) Stupasky of Quincy, four grandchildren; Courtney (Dan) Clupper, Brian Romack, Stephanie Miller and Eric Miller III, six great grandchildren; Natalie, Kaylee, Alla, Connor, Hannah and Daphne, a brother; Devon (Dayle) Mixer of Blue Springs, Missouri, and by a special “grand dog” Lulu.  Besides his parents, Darrell was preceded in death by a great grandson; Silas Romack, a son in-law; Michael Romack, a brother in-law; Ronald Frazier, and by his father and mother in-law; Kenneth and Pauline Frazier.  The family would like to thank Darrell’s kind and loving caretakers Kathy, Anna, and Blessing Hospice.
Memorial services honoring the life of Darrell will be conducted at 3:00 pm on Saturday, March 19, 2022 at the Triplett Funeral Home in Mendon.  Ursa Christian Church Pastor Bill Mitchell will officiate. Inurnment will follow at Quincy Memorial Park in Quincy. Visitation will be held from 1:00 pm until the time of services on Saturday at the funeral home. Memorial contributions in memory of Darrell are suggested to Blessing Hospice or to the Ursa Christian Church. You are invited to share your memories of Darrell and leave a condolence at www.triplettfuneralhomes.com
To order memorial trees or send flowers to the family in memory of Darrell Mixer, please visit our flower store.