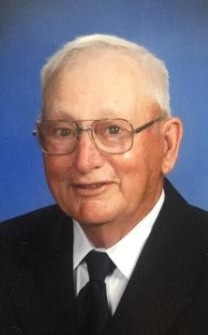 Donald F "Dingle" Dittmer, 89, of Coatsburg, died Sunday May 15, 2016, at North Adams Home.
He was born February 17, 1927 in Adams County. He was the son of Herman and Mary Tenvorde Dittmer. He married Bernice Blickhan on April 22, 1950 in Quincy, and she survives.
Donald attended Center School in Mendon and then graduated from unity high school in 1944.
Donald, along with his wife, Bernice, started their life of farming together in rural Adams County. He was a member of St. Edwards Catholic Church and St. Edwards' Leisure Club in Mendon, IL. Mr. Dittmer was a trustee for Honey Creek Township for many years. He was a member of the Eagles Club for 35 years. Donald was on the board for the Bloomfield Cemetery from 1982 to present. He was also a member of the Log Cabin Association.
Donald's many loves included dancing with his wife, listening and playing music , butchering, tinkering with equipment, traveling and deer hunting. He and Bernice entertained many deer hunters through the years. In his youth he also loved bicycling.
They raised three daughters, all surviving. Peggy (Dennis) Huhmann of Tipton, MO; Julia (Wayne) Zimmerman of Camp Point, IL; Linda Schafer of Godfrey, IL. Six grandchildren, Greg (Emily) Huhmann of O'Fallon, IL, Amanda Huhmann of Amherst, MA, Daniel Huhmann of Clarksville, TN, Renee (Mark) Goldinger, Kelly (Cole) Hutchings of Katy, TX, Samantha Schafer of Edinburgh, IL. Six great grandchildren; Claire and Grace Huhmann, Chase and Ella Goldinger, and Logan and Leah Hutchings; three siblings, Robert Dittmer, Rosemary Ashebacker and Dolores Dempsey.
He was preceded in death by his parents; one son, James; three siblings Harvey, Junior, and Dorothy Shildt.
A Mass of Christian Burial will be 11:00 A.M. on Friday, May 20, 2016 in St. Edward the Confessor Catholic Church in Mendon with Father Jeff Stone Officiating.  Interment will be in Calvary Cemetery in Quincy. Visitation will be from 9:30 A.M. until 10:30 A.M. on Friday, May 20, 2016 in the Hunter Funeral in Mendon. Memorial contributions have been suggested to the Bloomfield Cemetery or St. Edward Catholic Church. You are invited to share memories of Donald and leave condolences at www.hunterfuneralhomes.com.

To order memorial trees or send flowers to the family in memory of Donald Dittmer, please visit our flower store.