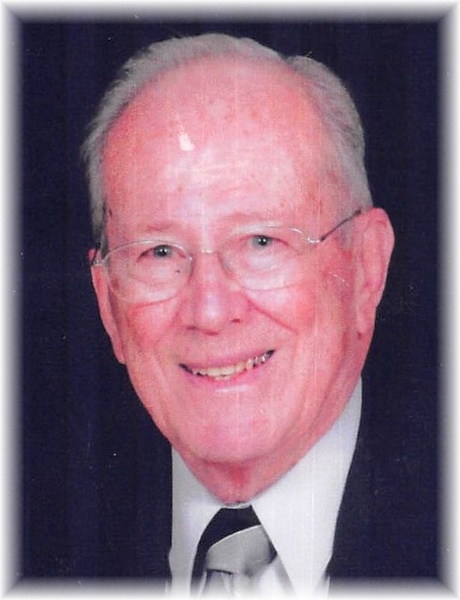 Dr Crank was born on December 27, 1925 in Golden to the late Dr. Avis A. Crank DVM and Lena (Lamb) Crank. He married his high school sweetheart Shirley J. Lawler on April 8, 1945 in the Methodist Church in Golden. She survives of Quincy. He passed a few days before his 72nd wedding anniversary.

Dr. Crank served his country as a pharmacist mate in the U.S. Navy during WWII. While in the Navy he was stationed in California, New York, a Marine base , Camp Lejeune, in North Carolina and a military hospital in Hawaii. Upon his return to civilian life he attended Carthage College and received a BS Degree in 1950 and was admitted to the University of Illinois Dental College in Chicago. After his graduation in 1954 he opened a dental practice in Rushville. After a short period he moved to Mt. Sterling and practiced dentistry in Brown County until he retired in July 1991. A Quincy Colleague asked if he would be interested in “Sealing” students teeth in Adams County Schools. This resulted in a need for a community dental clinic at the Adams County Health Department, which he staffed for five years, until its success required additional dentists. He worked at this clinic until his second retirement in September 2012.

During Gerald and Shirley’s 36 years in Mt. Sterling they attended the United Methodist Church and while living in Quincy, became members of the Unitarian Church. Gerald was a 50 year member and Past Master of Masonic Lodge #44 at Hardin and more recently a member of Camp Point Benjamin Lodge. In 1986 Gerald and Shirley donated land for the first Masonic Lodge building in Mt.Sterling’s 150 year lodge history. In 2009 the members of Quincy Consistory awarded him the Everett L. Lawrence Outstanding Service Award. He was also a member of Quincy Shrine Club, Illinois Valley Shrine Club, and Ansar Shrine and a member of the Quincy High 12 Club. During the years 1987 – 1989 he served as W. Grand Steward of Grand Lodge of Illinois at AF & AM, Springfield.

Gerald’s interests included, yearly family vacations to Canada and Northern Minnesota for his sport of Walleye fishing, gardening at his small farm North of Mt. Sterling and traveling and of course many trips to visit his daughter and her family in London.

Also surviving are; one sister, Margaret McCreight of Sioux City, IA., and a brother Lloyd (Dorothy) Crank of Anoka, MN.

He was Preceded in death by, two brothers, Harry and Curtis.

To order memorial trees or send flowers to the family in memory of Dr. Gerald Crank, DDS, please visit our flower store.