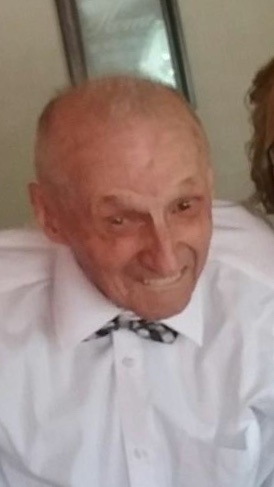 Eldred E. Post, 90, of Quincy formerly of Clayton passed away on Thursday, November 2, 2017 In the home of his daughter in Quincy.

Eldred was born on March 18, 1927 in Clayton to the late Gerhardt and Trinkje (Totsch) Post.

Eldred served his country in the United States Army during WWII. He had attended Holy Cross Lutheran Church in Golden and was a member of the Golden American Legion. He enjoyed reading, attending the Crossroads Country Opry, Traveling, Collecting cars, meeting people and spending time with his grandchildren.

He was preceded in death by one sister; Elvarie Ihnen and a brother-in-law, Wilfred Ihnen.

Memorial services will be 1:00 P.M. on Tuesday, November 7, 2017 in the Hunter Funeral Home in Golden with Jason Heck officiaiting. Memorials have been suggested to the Illinois Veterans Home Activity Fund. You are invited to share memories and leave condolences at www.hunterfuneralhomes.com

To order memorial trees or send flowers to the family in memory of Eldred Post, please visit our flower store.