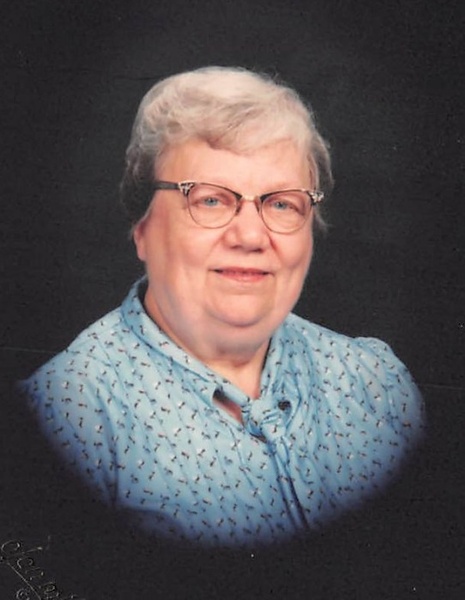 Eloise Baxter, 95, of Rushville, passed away at 10:30 PM, Sunday, February 19, 2017, at the Jacksonville Skilled Nursing and Rehabilitation Center in Jacksonville.

She was born on May 2, 1921, in Rushville, the daughter of Glenn Ellis and Lura (Settles) Moore.  She married Dwight Baxter on March 22, 1944, the First United Methodist Church in Rushville.  He preceded her in death on October 21, 2014.

After graduating from Rushville High School, she worked as a legal secretary for Bottenberg and Garrison Law Firm.  She served as Deputy Schuyler County Clerk from 1942 to 1944, was a clerk at J.C. Penney and Krauss Drug both in Rushville, a secretary in the Schuyler County School system for 12 years.  She and her husband owned and operated the What’zit Shop in Rushville.

She was a member of the First United Methodist Church.  She was very active in the community having served on the Schuyler County Home Bureau Board, serving as 4-H County Chairman and 4-H Leader, past member of the Culbertson Memorial Hospital Auxiliary Board, Past President and volunteer at the Schuyler Jail Museum and Genealogical Center in Rushville, Past President of the Schuyler-Brown Historical Society, Retired Senior Volunteer Program volunteer, member of the Business and Professional Women.  She was the Grand Marshall for the Smiles Day in 1997 and received the Studs Terkel Humanities Service Award for community service in 2000. In 1928, as a young girl, she helped unveil the tablet in Central Park, marking the location where Abraham Lincoln spoke.

To order memorial trees or send flowers to the family in memory of Eloise Baxter, please visit our flower store.