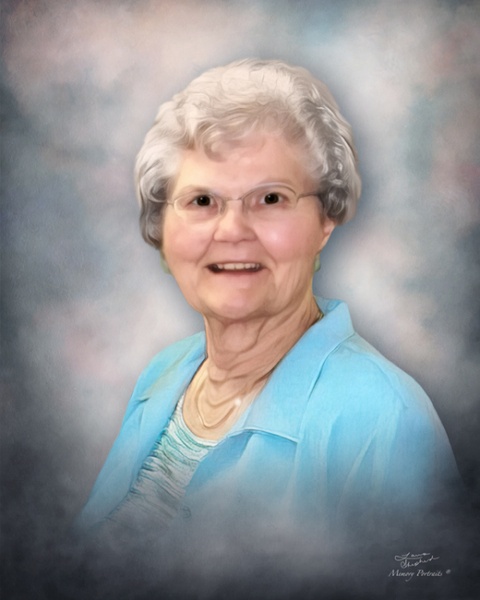 Esther L. Chockley, 96, of Rushville, Illinois, passed to her Heavenly Father on Monday, April 18, 2022, at 5:00 PM at Sunset Home in Quincy, Illinois.  She was the youngest of five children, born on March 24, 1926, to John and Lela (Payne) Bly in Schuyler County, near Littleton.  She attended local grade schools until they consolidated to Littleton, with high school in Industry, Illinois.

Esther was preceded in death by her parents, her husband, brothers:  Harold Bly and Rex Bly; and two sisters, Helen Sowers and Isabelle Reno.

Vic and Esther farmed in the Camden area for several years before Vic started selling feed to local farmers.  They opened their own feed business, Vic’s Feed Service, in 1968 and served the area for over 30 years.

Esther was always active in the community and in her church, Camden Methodist Church.  She loved to garden and can, and always had a beautiful flower garden.  She enjoyed her home and was an excellent seamstress, also making many quilts and crocheted items for her home and many gifts for family.  Esther’s greatest gift was friendship to all who knew her.  She was an inspiration to young and old alike and will be fondly remembered by all who were privileged to know and love her.

Visitation will be held Thursday, April 21, 2022, between 12:30 and 2:00 PM, with the funeral service at 2:00, with Pastor Dixie Croxton officiating at Triplett & Wood Funeral Home of Rushville.  Interment will immediately follow at Vermont Cemetery, Vermont, Illinois.

Memorials have been established for Senior Citizens of Schuyler County.

Family and friends are invited to share stories and leave condolences at www.triplettfuneralhomes.com.

Triplett & Wood Funeral Home of Rushville is assisting the family with arrangements.

To order memorial trees or send flowers to the family in memory of Esther Chockley, please visit our flower store.