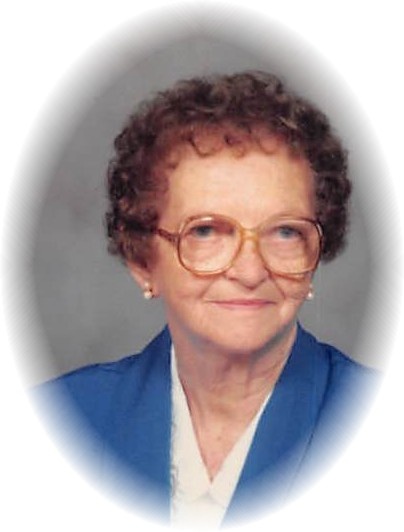 Fannie B. Gronewold, 102 of Golden passed away on Sunday, November 5, 2017 in the Golden Good Shepherd Home in Golden.

Fannie was born on January 18, 1915 in Wrisse, Germany to the late Bernhard and Margaret (Juilfs) Saathoff. She married Wilke Gronewold in 1940. Wilke passed away on July 19, 1998.

Fannie came from Germany, at the age of 7, on the ship U.S. George Washington. She attended Golden Schools. She was a member of Immanuel Lutheran Church in Golden. Fannie was a homemaker and loved sewing. She belonged to the ALCW and was a Gray Lady for the Golden Good Shepherd Home. She belonged to the Altar Guild and was a Sunday School Teacher.

She was preceded in death by; one son Mark Gronewold, one son-in-law, Dr. Angelo Gonzalez and two step sisters, Deloris Donahue and Anna Huls.

Services will be 11:00 A.M. on Wednesday, November 8, 2017 in the Immanuel Lutheran Church in Golden with Reverend Patricia Reep Officiating. Interment will be in Immanuel Cemetery in Golden. Visitation will be from 10:00 A.M. until the time of services in the church on Wednesday. In lieu of flowers memorials have been suggested to the Immanuel Lutheran Church or the Golden Good Shepherd Home. You are invited to share memories of Fannie and leave condolences at www.hunterfuneralhomes.com.

To order memorial trees or send flowers to the family in memory of Fannie Gronewold, please visit our flower store.