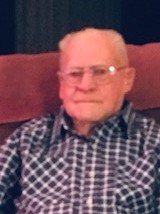 Dale served his country in the United States Army. He retired from Dohrn Trucking Company and was a school bus driver for Unit 4 School district. He was a member of the Northside Boat Club for 49 years, the Moose Lodge and the Adams County Emergency Corp. He enjoyed hunting, fishing, boating, camping, listening to blue grass music and going to the Crossroads Country Opry.

Dale was preceded in death by his parents, wife, one daughter, Sherry Emery, five brothers and one sister.

Graveside services will be 10:00 A.M. on Monday, July 6, 2020 in the New Providence Cemetery near Ursa. In lieu of flowers memorial contributions have been suggested to St. Jude Children’s Research Hospital. You are invited to share memories of Dale and leave condolences at www.hunterfuneralhomes.com

To order memorial trees or send flowers to the family in memory of Forrest Emery, please visit our flower store.