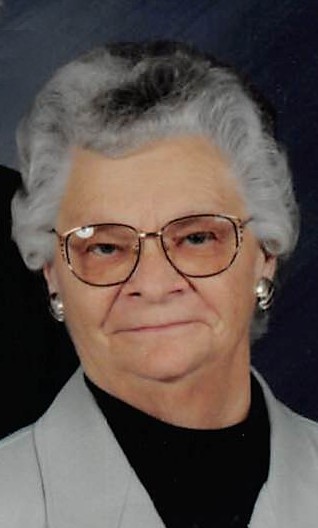 Geraldine L. Holtman, 85, of Golden passed away on Thursday, January 12, 2017 in the Golden Good Shepherd Home in Golden.

Geraldine was born on June 4, 1931 in Clayton to the late Fred and Lucinda (Behrens) Leerhoff. She married Wilbur F. Holtman on January 15, 1950 in the Good Shepherd Lutheran Church in Clayton. Wilbur survives of Golden.

Geraldine was a 1949 graduate of Camp Point Central High School. She was a member of Trinity Lutheran Church in Golden, where she was baptized in 1931.

She was preceded in death by two brothers, Donald and Roger Leerhoff.

Services will be 11:00 A.M. on Monday, January 16, 2017 in the Hunter Funeral Home in Golden with Reverend Brad Eidson officiating. Interment will be in the Golden Memorial Gardens in Golden. Visitation will be from 10:00 A.M. until the time of services on Monday at the Hunter Funeral Home in Golden. Memorial contributions may be made to the Trinity Lutheran Church in Golden or the Golden Good Shepherd Home. You are invited to share memories of Geraldine and leave condolences at www.hunterfuneralhomes.com

To order memorial trees or send flowers to the family in memory of Geraldine Holtman, please visit our flower store.