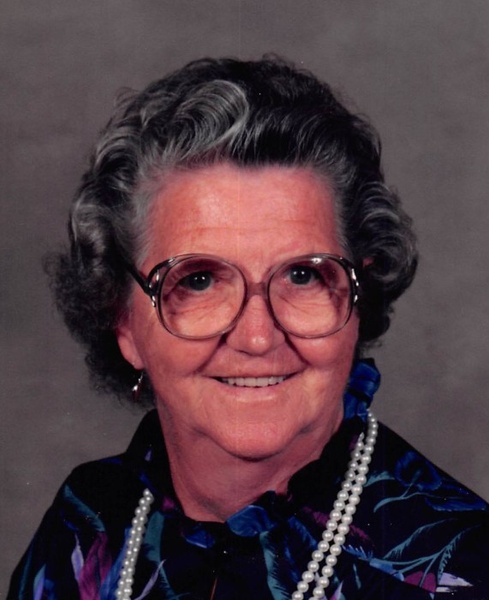 Gladys was born on August 18, 1921 near Denver to the late John and Elsina (Baker) Appledorn. She married Clarence Lanning on February 26, 1947 in Timewell. Clarence passed away on August 12, 1976.

After moving to Mendon, she worked part time at North Adams Home for many years. In her later years she enjoyed going “uptown” to visit with people and took many treats to her friends who worked in the various businesses in Mendon. Clarence and Gladys farmed south of Ursa for 18 years before purchasing a farm near Sutter, where they farmed until Clarence retired due to his health problems.  At that time they began building a home in Mendon. Clarence passed away before the home was completed, but Gladys lived there for nearly 40 years, before moving to the North Adams Home. Gladys enjoyed helping on the farm, but especially enjoyed raising chickens, raising vegetables in a large garden and her flower beds. She was a member of Zion United Church of Christ in Ursa , made many beautiful quilts and enjoyed any sewing project.

Graveside services will be 11:15 A.M. on Saturday, August 13, 2016 in the Mendon Cemetery in Mendon with Pastor David Schuring officiating. Visitation will be from 10:00 A.M. until 11:00 A.M. on Saturday, August 13, 2016 in the Hunter Funeral Home in Mendon. Memorial contributions have been suggested to Zion United Church of Christ. You are invited to share memories of Gladys and leave condolences at www.hunterfuneralhomes.com.

To order memorial trees or send flowers to the family in memory of Gladys Lanning, please visit our flower store.