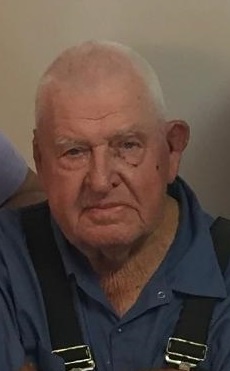 Glenn Hawley Orr, age 94, of Lima, Illinois, passed away at his home surrounded by family on Thursday, September 17, 2020.

Glenn grew up near Lima, Illinois; was baptized at Lima Christian Church and graduated from Hamilton High School in 1945.  In his younger years, he enjoyed trap shooting and boat racing and was a founding member of the Meyer Gun and Boat Club.

He was a farmer his entire life.   He actively farmed for nearly 60 years in the Meyer bottoms.  He endured several major floods while farming along the Mississippi River.   Meyer was always in his blood.   After The Flood of 1993, his heart was still at that place on the curve in the road on the way to the Meyer elevator.

He also served Lima Township as Road Commissioner for several years.  In his later years, he enjoyed attending the grand and great-grandkids’ sporting events.   Raising melons and pumpkins in the garden filled the summer months and reading occupied his time in the winter.

Visitation will be from 2:00 pm to 4:00 pm, Sunday, September 27, 2020, at Hunter Funeral Home in Mendon, Illinois.  Services will be at 11:00 am, Monday, September 28, 2020, at Hunter Funeral Home.   Interment will follow at New Providence Cemetery in Ursa, Illinois.    The family requests casual attire.  Memorials may be made to Blessing Foundation for Hospice or Unity High School FFA Chapter. You are invited to share your memories of Glenn, leave condolences and view his memorial video at www.hunterfh.com.

Please click here to view the video tribute
To order memorial trees or send flowers to the family in memory of Glenn Orr, please visit our flower store.