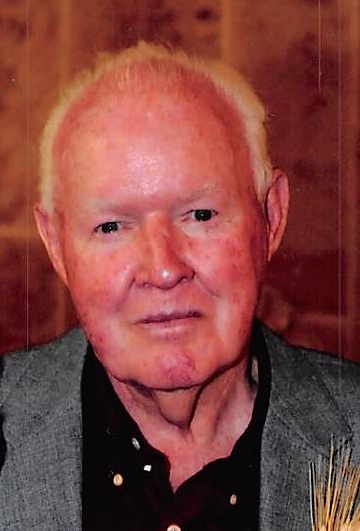 Hershel John Frazier,86, of Ursa passed away on Thursday, February 14, 2019 in North Adams Home in Mendon.

Hershel was born on August 12, 1932 in Quincy to the late John Norman and Esther Alvena (Heinecke) Frazier. He had lived his entire life on the same property  in Ursa before he became a resident of North Adams Home in December of 2016. He married Edith Hartzell on July 18, 1956 in Ft. Worth, Texas with his Brother-in-law, Bill Brown officiating.

He was preceded in death by; one grandson, Robert Norman Frazier; one sister, Ola Mae; two brothers, Richard and Eugene Frazier and a sister Wanda Brown.

Hershel attended Ursa School and graduated from Quincy High School in 1950. He farmed his entire life and drove trucks for Edgar McNay and John Isaaccson. He also bought and sold hogs at the farmers Market with his father. He spent most of his time attending community sales buying hogs and cattle, he then took them to market.

Hershel was drafted into the Army in 1952, serving in Korea and was honorably discharged in 1954. He was a lifetime member of the American Legion. His favorite things to do were bookkeeping and watching markets on DTN. He enjoyed traveling and was able to go many places with the Super Crost Seed Corn Company. He enjoyed going south for the winter. We can’t let out that he enjoyed Casinos.

Hershel was a lifetime member of the Ursa Christian Church, where he served on the church board and mostly the property Department of the church. He was a member of the Add A Couple Class and a past member of the Elks, Eagles and Adams County Farm Bureau.

To order memorial trees or send flowers to the family in memory of Hershel Frazier, please visit our flower store.