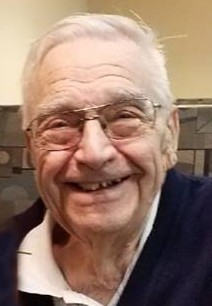 James W. “Jim” Greenwell, 93, of Quincy formerly of Mendon passed away on Wednesday, July 11, 2018 in the Illinois Veterans Home in Quincy.

Jim served his country during WWII in the Army Air Corps. He was awarded the American Campaign Medal, European African Middle Eastern Campaign Medal with two bronze Battle Stars, Good Conduct Medal and the WWII Victory Medal.He retired in 1988 as an insurance agent for Country Companies Insurance Company. He was a member of the Ursa Christian Church, Mendon Masonic Lodge #449 and the Bear Creek American Legion. He loved to play golf, go fishing, camping and loved going to Florida to visit his extended family.

He was preceded in death by a daughter, Rita Klossing, two brothers, Clarence and William Greenwell and two special nephews, Tom and Bud Burrows.

To order memorial trees or send flowers to the family in memory of James Greenwell, please visit our flower store.