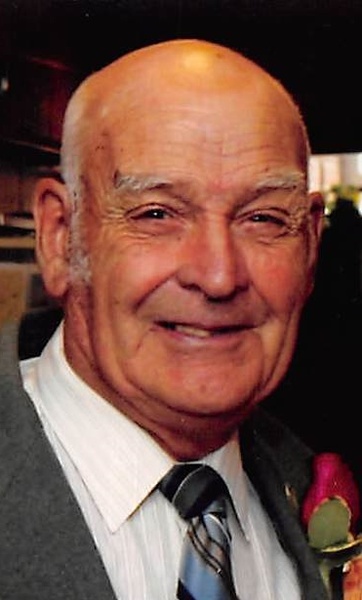 He was born on November 3, 1930, on the family farm, north of Clayton, the son of John E. and Rose (Hartman) Buss.  He was baptized and confirmed in the South Prairie Lutheran Church.  He attended the Sulphur Springs one room schoolhouse.  He served in the United States Army, during the Korean War and was wounded in action and was awarded the Purple Heart.

He married Jeanette Yvonne Post on Easter Sunday, April 1, 1956, at the Holy Cross Lutheran Church in Golden.  They lived southeast of Clayton for ten years.  In 1966, they purchased a farm north of Mendon.  She preceded him in death on August 18, 2011.

John farmed almost all of his life retiring in 2011, after the death of Jeanette.  He had also served as the Lima Township Road Commissioner for 9 years.  He was a member of the Golden American Legion # 801.  John and Jeanette enjoyed Country Music concerts and the races at Scotties Raceways.  They also traveled to Florida every year to visit Jeanette’s mother.  They also enjoyed Caribbean Cruses, trips to Hawaii, camping at the Mt. Pleasant, Iowa, Threshers for 8 days every fall.

The family will hold a private family service at the Hunter Funeral Home in Golden, with Reverend Ronald Graham officiating.  Interment will follow in the Golden Memorial Gardens, with military rites by the Golden American Legion.  Memorials are suggested to the Great River Honor Flight or Fishing for Freedom

To order memorial trees or send flowers to the family in memory of John Buss, please visit our flower store.