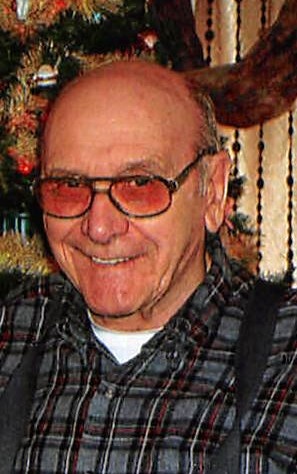 John was born on May 30, 1933 at Home in Honey Creek Township in rural Mendon, John still lived in this house prior to moving to North Adams Home. He was the son of the late Willis G. and Harriett L. (Dedert) Wyatt. He married Eleanor R. Myers on March 27, 1955 In the Ursa Christian Church in Ursa. Eleanor survives of Mendon.

Also surviving are two daughters, Michele Oberling and her husband Jaime of Plainville, Renea Wyatt of Aurora, CO., two grandchildren, whom he loved dearly, Justin and Ashley Oberling of Plainville, one sister-in-law, Roma Wyatt and several nieces and nephews.

He was preceded in death by a brother, Wayne Wyatt and a brother in infancy, Richard Wyatt.

John graduated from Unity High School in 1951, where he excelled in athletics. He was a lifelong farmer and high school sports enthusiast. He loved watching his girls in their sports at Unity and continued by attending his grandchildren’s sporting events at Payson –Seymour. One of John’s biggest highlights was being able to attend the Boy’s Basket Ball State Tournament in 2014, in which Unity High School was playing.

John was a member of the Mendon Congregational Church, Unity Quarter Back Club, Adams County Farm Bureau and the Mendon Masonic Lodge #449. He loved cats, cars and going to the casino. John was also able to help the public and medical profession become familiar with and understand the effects of Tourette Syndrome, of which not much was known about when he was diagnosed with it.

The staff of North Adams Home was John’s other family and Eleanor, Michele and Renea will be forever grateful for the love, care, concern and support they have shown for John and wish to thank them from the bottom of their hearts.

A celebration of John’s life will be 11:00 A.M. on Saturday, October 8, 2016 in the Hunter Funeral Home in Mendon with Pastor Sheri Renner officiating. Visitation will be from 5:00 P.M. until 7:00 P.M. on Friday, October 7, 2016 in The Hunter Funeral Home in Mendon. It was John’s wish to be cremated and this will take place following the services on Saturday with a private family burial at a later date in the Mendon Cemetery in Mendon. Memorial contributions have been suggested to the Congregational Church of Mendon or the North Adams Home. You are invited to share memories of John and leave condolences at www.hunterfuneralhomes.com

To order memorial trees or send flowers to the family in memory of John Wyatt, please visit our flower store.