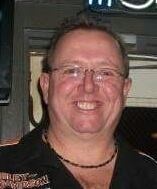 Kenneth A. Pratt, 57, of Ursa passed away on Wednesday, March 23, 2016 in Memorial Medical Center in Springfield.

Kenny was born on March 20, 1959 in Toledo, Ohio to the late Milton and Marie Pratt. He married Terri M. Hartford on July 8, 1978 in Toldeo, Ohio. Terri Survives of Ursa.

Kenny worked first for BFI, then Area Disposal before going to work for Neil Oil Company in Mendon. He enjoyed stock car racing, NASCAR, Harley’s and spending time with family and friends. Kenny never knew a stranger and never judged a soul.

Please click here to view the video tribute
To order memorial trees or send flowers to the family in memory of Kenneth Pratt, please visit our flower store.