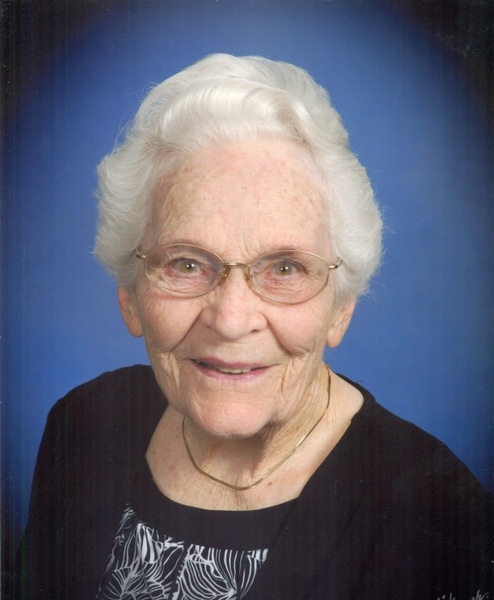 She was born in Burton Township, Adams County, on July 21, 1923, the second daughter of Edward William and Lydia Caroline (Markword) Cramsey.  She attended Ursa Grade School, and before her marriage, was employed by the Pepsi Cola Company and the International Shoe Factory, both in Quincy, Illinois.

On November 5, 1946, Mary was united in marriage to Glenn Carl Starman in St. Edward’s Catholic Church in Mendon by Reverend Henry Knoedler.

Preceding her in death were her parents, her husband on January 7, 1984, twin grandsons Adam Michael and Aaron Matthew Burton in 1977, and grandson Ryan Elliot Koenig in 2000.  Three sisters and their husbands, Ruth E. (Harold) Henze, Carlene E. (Billy) Bennett and Geraldine “Gerry” T. (Willard) Buss as well as one nephew, Gene Henze and one nephew-in-law John Seibert, also preceding Mary in death.

Our mother was an excellent seamstress, making wedding gowns for two of her four daughters, as well as other garments, an excellent baker, making hundreds, if not thousands of cakes, cookies, pies, doughnuts, and cinnamon rolls.  She enjoyed gardening, canning and/or freezing the fresh fruits and vegetables, and mowing her yard.  Our mother was always ready to serve not only her family, but her church by being a greeter at Mass, a gravy maker at St. Edward’s Annual Turkey Dinner; assisting with Mass at the North Adams Home; and joining the “Blanket Ladies” at St. Anthony’s Church.  She was honored with the Springfield in Illinois Diocesan Council of Catholic Women “Women of Distinction” Award.

She also served her community by serving as a substitute cook for the Unit 4 School District, as well as being a member of the American Legion Bear Creek Post # 823 Auxiliary for over 50 years, baking pies, serving dinners and working in the food stand at the Adams County Fair, and playing bingo with residents of the Illinois Veterans’ Home in Quincy.  She had also worked as an election judge for the Village of Ursa, volunteered for many blood drives held by the American Red Cross and volunteered at the North Adams Home, where she was honored as Volunteer of the Year.

Our family would like to express our sincere gratitude to extended family, neighbors and friends who have called, visited, and/or brought our Mother some of her favorite foods.  We would also like to thank Molly Schulte, RN, our mother’s hospice nurse.

A Mass of Christian Burial will be held at 10:00 AM, Thursday, October 29, 2020, at St. Edward the Confessor Catholic Church in Mendon, with Father Jeff Stone as celebrant.  Interment will follow in the New Providence Cemetery at Ursa.  Visitation will be from 4:00 PM to 7:00 PM, Wednesday, October 28, 2020, at the Hunter Funeral Home in Mendon, with a Prayer Service at the beginning of the visitation.  Memorials are suggested to St. Edward the Confessor Catholic Church or the Blessing Foundation for Hospice.

To order memorial trees or send flowers to the family in memory of Mary Elizabeth Starman, please visit our flower store.