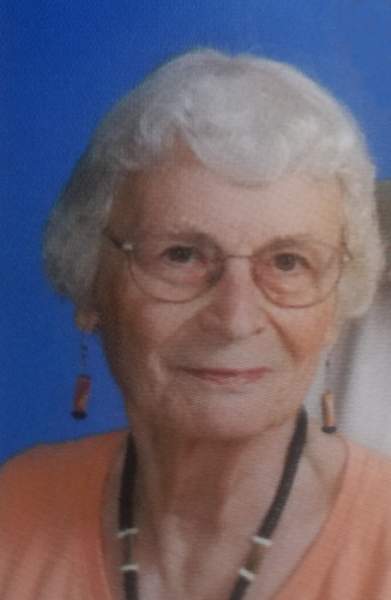 Patricia was born on December 22, 1929 in Quincy to the late John and Otillia (Schoenekase) Wilde. She married William A. Binger on November 11, 1948 in Quincy. William survives of Coatsburg.

She was preceded in death by one brother, Lawrence Wilde and one sister-in-law, Dorothy Wilde.

Patricia was a member of St. Edward the Confessor Catholic Church in Mendon. She was a secretary for Binger Quarry, retiring in 2003. She was a member of the North Adams Historical Society, Mississippi Valley Archaeological Society and American Legion Auxilliary. She enjoyed Native American artifact hunting, making jewelry, cooking and baking.

A Mass of Christian Burial will be 10:00 A.M. on Tuesday, September 19, 2017 in St. Edward the Confessor Catholic Church in Mendon with Father Jeff Stone officiating. Interment will be in Ellington Presbyterian Cemetery near Quincy. Visitation will be from 5:00 P.M. until 7:00 P.M. on Monday, September 18, 2017 in the Hunter Funeral Home in Mendon with a prayer service at 7:00 P.M. Memorial contributions have been suggested to the American Cancer Society. You are invited to share memories of Patricia and leave condolences at www.hunterfuneralhomes.com

To order memorial trees or send flowers to the family in memory of Patricia Binger, please visit our flower store.