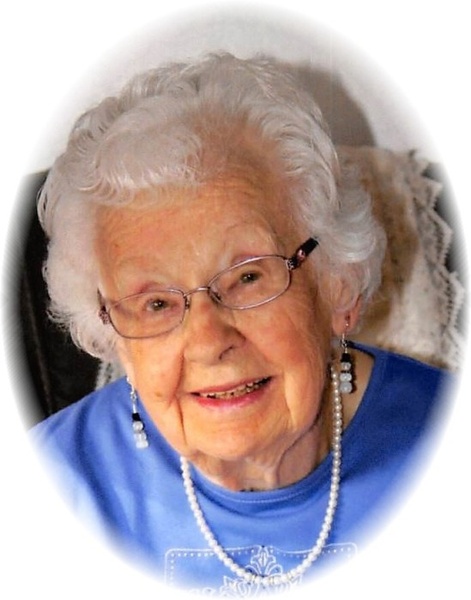 On January 25, 1942 she married Irvin Leenerts in West Ely, Mo.  They lived and worked the family farm near La Prairie until retiring to Golden in 1981.  Pearly was a supportive farm wife, delivering many meals to the fields.  Homemade bread and cinnamon rolls were her specialty.  She had a green thumb, especially for African violets, and was an accomplished seamstress.  She was a member of Trinity Lutheran Church in Golden where she was active in the choir, women’s group and the quilting circle.  She was also a member of the Good Shepherd Home Auxiliary.  During her lifetime, Pearly contributed at least 12 gallons of blood to the Red Cross.  She and Irvin enjoyed many train trips to the West Coast.

Pearly was one of the first nurses’ aids to work at the Golden Good Shepherd Home when it opened in 1963.  She often entertained the residents of the home by playing the piano when she was an employee and later as a volunteer.  Even in her 90’s she enjoyed playing “for the old folks”.  She moved to the home three years ago and continued to share her musical gifts with the residents, playing the piano, the organ and harmonica.

of Batesville, AR, Emily (Kris) Crass of LaPrairie, IL and Diana (Tom) Brosius of Richmond, KY.  Pearly has 23 great-grandchildren and one great-great-grandchild.  She’s also survived by one brother Kenneth Schluckebier of Palmyra, MO and many nieces, nephews and friends.

She was preceded in death by her husband Irvin in 2004, her brother Emmet Schluckebier, her sister Doris Vahle and her son-in-law Ed Trantham.

Services will be 12:00 P.M. on Tuesday, May 23, 2017 in the Trinity Lutheran Church in Golden with Pastor Brad Eidson officiating. Interment will follow in the Golden Memorial Gardens in Golden. Visitation will be from 5:00 P.M until 7:00 P.M. on Monday, May 22, 2017 in the Hunter Funeral Home in Golden. Memorial contributions have been suggested to Trinity Lutheran Church or the Golden Good Shepherd Home. You are invited to share memories and leave condolences at www.hunterfuneralhomes.com

To order memorial trees or send flowers to the family in memory of Pearly Leenerts, please visit our flower store.