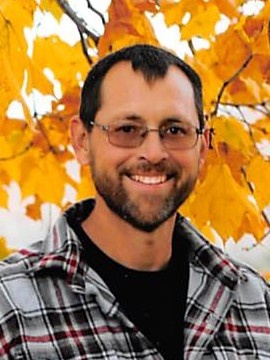 Randall  Kent “Randy” Lomax, 45, of Lima passed away on Sunday, May 7, 2017 in at Barnes Jewish Hospital in St. Louis., awaiting a liver transplant due to Wilson’s Disease, a lifelong battle for him and his family. He never let it slow him down.

Randy was born on January 1, 1972 in Quincy to Maurice Freddrick Lomax and the late Beulah Rose (Waddell) Lomax.

Randy was a worker. He experienced life through his many different jobs. He was a farm hand, union construction worker and Master Lawn Irrigation Technician for Ever-Green Lawn Irrigation. He also operated the water system for the village of Lima, was a village board member and a Volunteer Firefighter on the Lima-Tioga Fire Protection District.

Though he was a hard worker, Randy never let it consume his life. He always made time for family and friends. He was an avid outdoorsman, loved riding Harleys and supported his son and the Unity Mustang Football Team.

He was preceded in death by; his mother, a sister, Lana Jean Lomax, his grandparents and many aunts and uncles.

A celebration of Randy’s life will be 11:00 A.M. on Friday, May 12, 2017 in the Lima Crossing Church with Pastor Walt Wilcoxson officiating. Family will receive friends from 9:00 A.M until the time of services at the Lima Crossing Church on Friday.  Casual dress is requested. In Lieu of flowers memorial contributions have been suggested to the Chase Lomax Education and Living Fund. You are invited to share memories of Randy and leave condolences at www.hunterfuneralhomes.com

To order memorial trees or send flowers to the family in memory of Randall K. "Randy" Lomax, please visit our flower store.