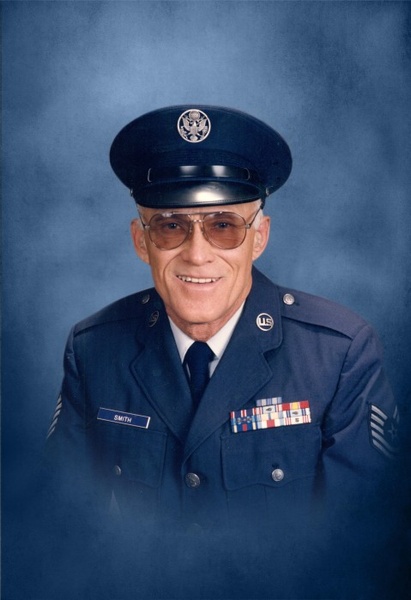 He was born on April 25, 1935, in Schuyler County, Illinois, the son of Glen and Helen M. (Vaughn) Smith, Sr.  He first married Elizabeth Pavlović in Germany.  He later married Judy Johnson Gregerson on April 13, 1979, in Marinette, Wisconsin.  She preceded him in death on September 24, 2003.

A 1955 graduate of Rushville High School, Russell participated in all sports and was named Prom King.  After high school, he enlisted in the United States Air Force and began a 23 year career retiring with rank of Master Sergeant.  He and his wife Judy owned and operated a gas station in Browning.  He also retired from the Illinois Department of Natural Resources.

He enjoyed the outdoors, hunting, fishing and camping.  He had a love for animals, especially birds.  He had a pet woodpecker that would come to window and peck wanting pecans that Russell would regularly feed it.  Every day except Sunday, he would have breakfast at the Browning Senior Citizens Center, the site of his former gas station.  He would get the biggest smile anytime he could spend time with his grandchildren and great grandchildren.

Services will be at 11:00 AM, Wednesday, August 26, 2020, at the Wood Funeral Home, with Bishop Shea Trost officiating.  Interment will follow in the Rushville City Cemetery, with military rites by the United States Air Force Burial Detail and the Schuyler American Legion Post #4.  Visitation will be from 5:00 PM to 7:00 PM, Tuesday, August 25, 2020, at the Wood Funeral Home in Rushville.  Memorials are suggested to the Browning Senior Citizens Center or the Rushville Rocket Boosters.