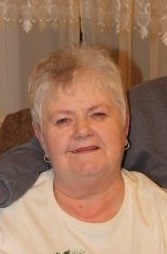 She was born on May 6, 1939, in Schuyler County, Illinois, the daughter of Claude Howard “Pug” and Nina Rosalie (Armel) Sipes.  She married Richard Chockley on June 29, 1957, in Rushville and he survives.

A 1957 graduate of Rushville High School, Sandy worked at the Rushville Dairy Queen for 40 years retiring in January, 2012.

She was a member of the Rushville Assembly of God Church.  She served as a Girl Scout leader and volunteered at the HELP Center in Rushville.  She enjoyed sewing, crafts, going to various community and music events.  She collected Andy Griffith memorabilia.  Sandy was well known for her sense of humor.  She loved spending time with her grandchildren. They couldn’t wait to open their birthday cards to see how grandma had folded their money.

To order memorial trees or send flowers to the family in memory of Sandra Chockley, please visit our flower store.