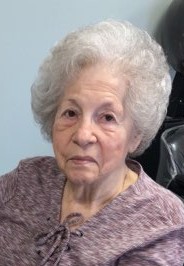 A loving tribute to honor the life of our mother and grandmother, Shirley Lou Penn, formerly of Ursa, IL and Edina, MO.  Shirley was received by our Savior on Friday, March 20, 2020.

Shirley and Floyd lived and farmed in the Meyer bottoms for most of their married life, where they grew their family. Family meant everything to Shirley and one of her greatest joys was having her house full on Sundays for family dinners. She was a wonderful cook and made the very best pies. She spent her entire life caring for her children and grandchildren.

Private family graveside services will be held in the New Providence Cemetery near Ursa. Memorial contributions may be made to the Labelle Manor Care Center in Labelle, Mo. and may be sent to the Hunter Funeral Home at PO Box 258 Mendon, Illinois 62351. You are invited to share a memory of Shirley at www.hunterfuneralhomes.net

To order memorial trees or send flowers to the family in memory of Shirley Penn, please visit our flower store.