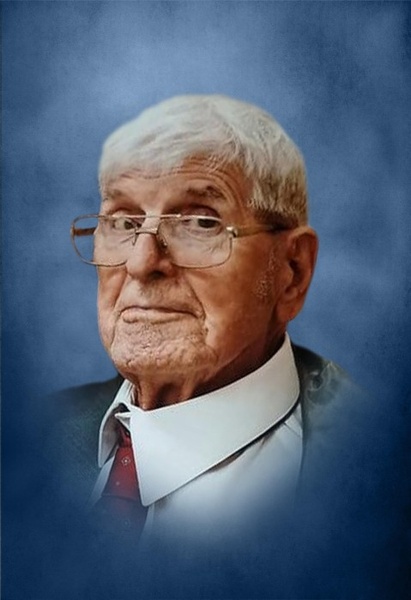 Wayne was born at home on January 15, 1931 in Schuyler County, Illinois, the son of D.M. and Florence Ella (Walker) Tomlinson.  Wayne and his nine siblings (Grace Marie (Gracie), Robert Morris (Tommy), Jessie Leroy (Orvie), Glen Eddie (Polecat), Dorothy (Dottie), Gerald (Honker), Anna Lee (Annie), John Paul (JP) and Marilyn ) (Wayne referred to himself as the “oldest of the second five”) were raised at 125 East Clinton St. in Rushville, a home that is still used for gatherings of the 150+descendants of D.M. and Florence.
“Dummer” was given 32,685 days on this earth and used them all to complete the tasks he took on as he served his family and community
He married Frances Decker on September 2, 1954, in Champaign, Illinois. She preceded him in death on March 1, 2015.

A 1949 Rushville High School graduate, Wayne served in the U.S. Navy as a Sea Bee during the Korean War era. He was stationed in Guantanamo Bay Cuba, Port Hueneme Oxnard California, and in Newfoundland Canada during his enlistment. Enlisted in November of 1951 at Great lakes Naval Base, Honorably discharged in September 1953 at Quonset RI He earned the National Defense Service Medal

He finished college, graduating from the University of Illinois in 1958, earning a Bachelor’s Degree in Agronomy.

In his youth, he worked for the family business ”Tomlinson Trucking”  Wayne like all of his brothers were driving trucks, all had stories of driving truckloads of materials before they were ten years old.  “We’ll haul anything that’s loose” was their slogan that was printed on the Tomlinson Trucking checks with the phone number “520”

He worked at the Federal Land Bank in Watseka IL from 1958 to 1962, when he returned to Rushville to operate the family business after his father DM had medical setbacks.

Tomlinson Trucking and Soil became Tomlinson Fertilizer. “We’ve been in business since fertilizer was a four letter word” and the Schuyler County Spreader were slogans posted on the familiar white trucks with yellow and blue stripes.  A long list of workers passed through his shop doors over the years tackling a litany of work from custom fertilizer application, well water hauling, anhydrous ammonia delivery and application, to house moving. There were always things that needed done until closing the doors in 1982.

Wayne Tomlinson Real Estate and Appraisals in Rushville opened in 1976 until he retired in 2015. Wayne was a State Certified General Appraiser, which was and exceptional qualification. He was licensed to appraise real estate from the smallest lot to large commercial properties and farm ground.

Wayne was a long time member of Rushville Rotary and a member of the First United Methodist Church in Rushville.

Early on, Wayne was involved with the committee to purchase the land that was to be developed into Schuy-Rush Lake.

Wayne, along with others, was a driving force in obtaining and restoring the Phoenix Opera House in Rushville.  He would continue to serve on the board and volunteer at the Phoenix.

He believed in hard work and the rewards that followed.  He was well known for his professionalism and was sought out for his advice and wisdom.  His sense of humor was also a hallmark of his character.   Many will tell you of humorous phases and anecdotes he would use for almost any situation.   When asked in his last few days “How are you doing today?” Wayne said “I’ve been worse.”

He was passionate about Rushville and Schuyler County and its history.

A celebration of Wayne’s life will be held on Friday, July 31, 2020, at 10:00am. We will gather at the Family house, 125 East Clinton Street “Under the Big Tree” with Lyn Mounce officiating. Friends and family alike are welcome to attend and share thoughts and memories.  Interment will follow in the Rushville City Cemetery with military honors.

To order memorial trees or send flowers to the family in memory of Wayne Tomlinson, please visit our flower store.