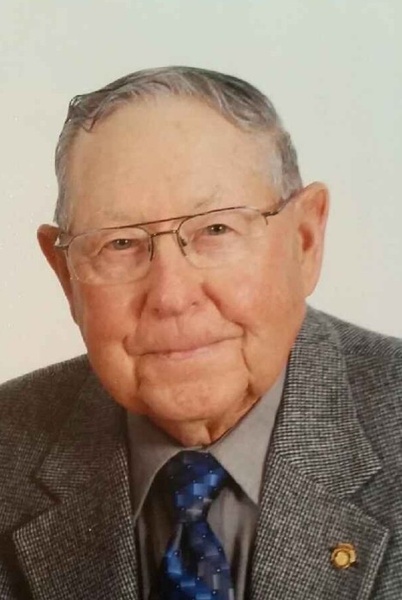 William E. “Bill” Wilcox, 93, of Quincy formerly of Loraine passed away on Wednesday, July 3, 2019 at the Illinois Veterans Home in Quincy.

Bill was born on February 11, 1926 in Loraine to Earl K. and Mabel I. (Glance) Wilcox. He married Lillie A. Hardy on May 23, 1948 celebrating 71 years of marriage this past May. Lillie survives of Quincy.

Bill Proudly served his country in the United States Navy during WWII in the Pacific Theatre. He had attained the Rank of Seaman first class and was awarded a purple heart and various other campaign ribbons and commendations.  He was a member of the United Methodist Church of Loraine, where he served in several capacities, a member of the Bear creek American Legion, Camp Point VFW Post #5410 and the DAV. He was former Keene Township Board Trustee. Bill was a lifelong farmer in the Loraine area and a substitute rural mail carrier for 20 years. He was an avid St. Louis Cardinals fan and enjoyed coon hunting.

He was preceded in death by his parents; one son, William “Bill” Wilcox, Jr. and a daughter-in-law, Deborah Wilcox.

Services will be 10:00 A.M. on Tuesday, July 9, 2019 at the United Methodist Church of Loraine in Loraine with Reverend Connie Jenkins and Chaplain Richard Martin officiating. Bill will be laid to rest in New Loraine Cemetery with Military Honors by the Camp Point VFW Post 5410 and the Navy Funeral Honors Detail. Visitation will be from 4:00 P.M. until 7:00 P.M. on Monday, July 8, 2019 at the Hunter Funeral Home in Mendon. Memorial contributions have been suggested to the United Methodist Church of Loraine or the Illinois Veterans home fund for Fifer Hall.

To order memorial trees or send flowers to the family in memory of William Wilcox, please visit our flower store.